The recent OCA study visit to the Ashmolean Museum in Oxford offered the opportunity to see work by two Titans of British art juxtaposed. Although contemporaries, Moore was twenty years older than Bacon, and had the additional life burden of serving in the Great War and being gassed. However, Moore’s work is essentially optimistic whereas Bacon’s is tortured.

The exhibition was relatively small, compared to say a Royal Academy block buster, but non the worse for that. It comprises three rooms of drawings, paintings and sculpture which amplify each other in the relatively small spaces.

Of particular interest to me were the large selection of drawings by Henry Moore, including quite a few of his Air Raid and Miners series which he undertook as an Official War Artist. I have only seen these reproduced in publications before and have been fascinated about the amount of texture he managed to introduce to a ‘drawing’. I had always imagined them bigger because of their complexity and their detail. In fact, they were generally between A4 and A3, because they had to be done on location under difficult working conditions.

The illustrations of More’s drawings included here are from an old monochrome catalogue (Sylvester, 1968), for illustrative purposes and are not works included in the current exhibition. 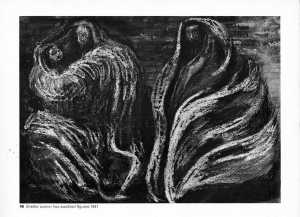 Our tutor gave an interesting background to Moore’s inspirations from archeology, landscape and anatomy, especially bones. Certainly, looking at his representations of sleeping figures, I feel that he draws figures as if he were mapping a landscape, not with contour lines but with lines running orthogonal to them. I feel he is modelling a landscape in two dimensions as if he were sculpting in graphite and ink.

I love the textures he achieved by using a combination of materials; wax crayon, coloured crayon, pencil, ink, gouache and watercolour. From relatively humble and, importantly, portable drawing media, he achieved a great richness of tone and description.  He managed to give his figures great volume at the same time as expressing their vulnerability; they are both solid and diaphanous. In some drawings, the figures might just be piles of bones with gauze draped over them. 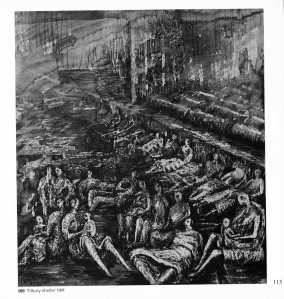 I am interested to read (Sylvester, 1968, p53) that he collected shells, pebbles and bones, and one can see the enduring influence of these forms. Upright Forms No 1, 2 and 7 (1955-6), included in this exhibition but illustrated here from an earlier catalogue, reference bones articulated against each other like knuckles. They also include hieroglyphic lines and symbols, as did much of his earlier work, echoing primitive civilisations. Gradually, much of the textural and calligraphic detail disappeared from his sculpture, and volume became all.

My favorite Moore drawing in this exhibiton was a study for a Crucifixion where the Christ figure isn’t nailed to a cross but draped over it. The body was modeled in a simple but very moving way. I took a few minutes to inadequately sketch it. 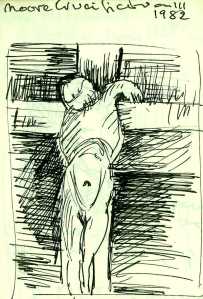 It is clear that Moore was a life long sketcher, but Bacon, in contrast, rarely drew studies for his work from life and the exhibition included a display of photographic references salvaged from the deep litter of his studio after his death. These two artists contrasted not only in their approach to work and their outlook on life but in their essential approach to the body; Moore seeing the bones and Bacon the flesh. I suspect that Moore’s studio also never looked like this.

Bacon’s studio has been preserved in Dublin City Gallery, The Hugh Lane which I was fortunate enough to visit in November 2013. The mess is simply unimaginable as a serious work area. There are landslides of reference books across the floor and paint samples daubed on all the walls and doors. He must have had to kick clear a bit of floor area to stand and work.

A further contrast to Moore is presented in the exhibition by juxtaposing Bacon’s irreligious Pope figures and triptychs with Moore’s studies for church commissions.

Bacon, Three Studies for Figures at the Base of a Crucifixion c.1944 [Oil paint on 3 boards]. Tate

Moore’s drawings often showed action frozen or total inaction, as above, but Bacon’s figures are tortured and writhing with movement. They are a blurry, slow shutter speed photograph of agonised action. He often constrains this movement within a rectilinear framework and includes mundane details such as a blind or a light switch in otherwise empty interiors.

I am mature student studying art with The Open College of the Arts.
View all posts by SteveCussons →
This entry was posted in Study Visits and Exhibitions. Bookmark the permalink.