Posted on August 6, 2014 by SteveCussons

I wanted to return to wood cut following my experiments in waterbased Japanese style woodcut,  to try more expressive marks and use oil based inks. I returned to a design I developed for a linocut, but didn’t print because I couldn’t, at the time, work out how to cut the very small isolated shapes of birds without the lino collapsing. My ambition for the print was to convey the stillness of dusk in the winter Chilterns, with the rooks coming in to roost.

My plan for printing was to:

I felt this was far too strong a colour when printed, and the sky far too noisy. I tried masking the clouds with strips of tissue paper, but this was fiddly and not very repeatable. I therefore decided to try and make the cutting marks in the sky, the same tone as the first layer by graduating the ink, to really reduce their impact. I forgot to photograph this stage. The third layer was a tone darker, but not so dark that my birds would not show up against it. 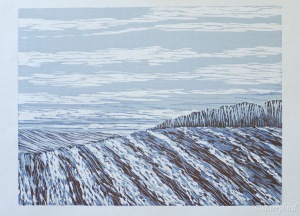 I then carved the birds into the back of the same plate and proofed them, but, again, the cutting marks were too prominent, so I cut out the birds from my proof to form a mask to print through. 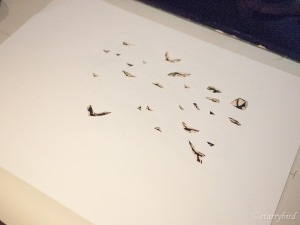 The T registration system worked very well, as did printing through a mask. I think the different colourways are all successful but I think the final, cool one conveys the winter dusk mood most effectively. Looking back at my earliest multiplate prints, I feel I have come a long way in my selection of colours. Although the print captures my personal experience of walking the Chiltern Way this last winter, it is still rather cliched.

This left me with an ambition to try and produce a woodcut moving beyond simple representation. I did some sketchbook work exploring ideas around ‘family’ based on an old photograph. My idea was to explore ways of representing differences, interactions and cohesiveness of the family, and the way a family can be a defensive unit against external difficulties. 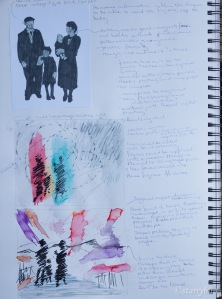 To express the different characters, I decided to monoprint a simple background using cool blue for my mother’s calm rationality, red for my father’s more changeable character and a sunny yellow for happy kids and the glow around a new baby. I used the back of my plate for this. I then cut my basic design of the family, trying to retain the body language whilst simplifying, and surrounded it by random jagged marks to represent the outside world.

Proof of monoprint and first layer, with felt tip drawn over, to develop second layer cutting. 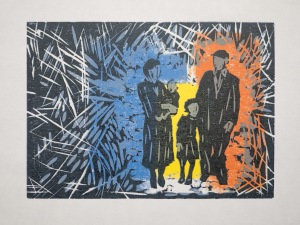 I had prepared about four backgrounds and decided to use one print to explore using gold leaf to enhance that family glow. I tried first brushing pva onto it but it just broke up in the brush, so I brushed a little pva onto my background and stick gold leave onto it, rubbing away any not stuck. 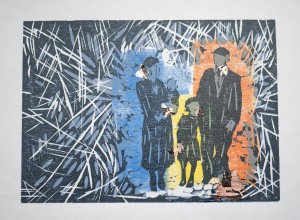 The ink has taken weeks to dry in the gold, and I am not sure that it adds anything.

I think that this is one of the most ambitious prints I have attempted in terms of subject, and I think it works. I showed it to my sister without any explanation. She, of course, recognised the family group, and said she liked the interaction and ‘loving’ glow but didn’t remember our childhood environment as being as chaotic as this. Another student who saw it, told me that she liked the dynamic of the family group but found the mark making ‘threatening and disturbing’. I guess this means I conveyed something of my idea.