The opportunity offered for a two day course in etching aluminium plate using copper sulphate. Firstly we divided a plate up into three areas. I the first we did an exposure strip, exposing a section every 10 or 15 seconds to a total of one minute. In the others we applied resists (hard ground, Brunswick Black, acrylic paint, Klear) and scratched or rubbed through them to create positive shapes, in the third we applied local resists (marker pen, wax crayon, lipstick , beeswax, spray paint, foundation) to create negative marks.

Some areas were completed unetched, for instance where the beeswax was, so I used these areas to try some more tests.

The plate was etched for 1 minute 30 seconds in total,  washed in water to stop the etch, then washed in caustic soda solution to remove the waxy substances, and finally rubbed with white spirit to remove the hard ground and Brunswick Black. The plate was then thoroughly polished so that the non-etched areas would print clean.

I wasn’t very happy how my tests had printed, so in the evening I tried reprinting on my own press and with my own inks and paper, rather than the bread and butter paper above. I also polished the plate better. I used Intaglio Etching ink and Somerset paper, and I think this print shows more sharp detail, mostly due to the polishing and quality paper, I suspect.

We then had a go at developing an image on a plate. My designs for these experiments have been drawn from the current sketches of flasks after Morandi. 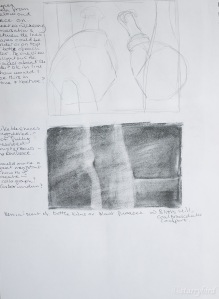 I used acrylic paint, applied with crumpled paper and drawn into with a brush handle, wax crayon, candle wax, marker pen and thinned acrylic paint over smeared very thin oil. A wide range of marks and tones was the aim.

I really like the textures although I would not normally combine so many on one plate. I like the imprecise, non-mechanical nature of most of the marks; I am less taken with the marker pen. I found it very difficult to accurately interpret my drawing. For my next plate, I therefore used a lithograph pencil as a stop out hoping for more control. I chose a sketch to work from which would allow me to explore tone rather than texture.

I really like the subtle effect of this although the pencil marks are more dominant than I hoped. The highlights are also not as clean as I would like and I plan to burnish these to see if I can get better contrast. The proportions of the bottle on the right are incorrect and the ‘arch’ should disappear into the dark tone, and be indistinct. However, if it is read without reference to the sketch, it has a dreamy feel and is worth working on further.

We also explored the process of sugar lift, degreasing a plate, as before but then painting on an image in Camp Coffee or sugar solution. I used an old plate with some faint marks on it but I felt these might, if anything, add to the image. When the sugar was dry, this was over painted with hard ground and again left to dry. The plate was then immersed in hot water and the areas painted in sugar just lift off. When the plate is then put into the copper sulphate bath, these areas etch to create a positive image. This process was really straight forward and very direct. I found it much simpler to create a design this way and the effect is more painterly. The plate was etched in three steps, covering up more of the image each time, to create a range of tones.

Since this is a positive, largely line, image, it doesn’t have the same tonal impact as the designs created in negative. To balance this, I tried applying local blocks of colour with a small roller. The colours reference those used by Morandi in his painting ‘Still life’ 1962 seen at the Estorick last week. 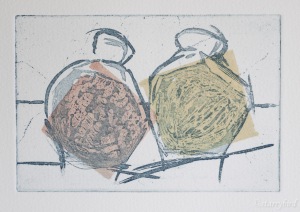 I think this print has a satisfying simplicity, range of tones and interest in line and texture. The faint, spidery marks from an earlier exercise add another dimension of mark.  I am delighted to have managed to produce this in my first attempt at etching. The process was very straightforward and much more accessible than I had expected.